As we all know the Amesbury launch was cancelled today...

"The Amesbury field is NOT going to be available for our September 17 launch. The first hay cutting on the part of the field we use was pushed back because of the birds. The same thing happened last year and the farmer didn't bother with the second cutting." -billspad

...so instead I decided to take advantage of the great weather and hike the Webster Slide which is a section of the Appalachian Trail about one hour north of Concord, NH. To get there you take I-93 north to Plymouth State University and then some back roads through Rumney and Warren to the trail head. It was a beautiful fall day with blue sky and cool temperatures so the trip up north was quite enjoyable.

With about 5 miles to go by car to arrive at the start of the hiking trail, I drove through the center of Warren on 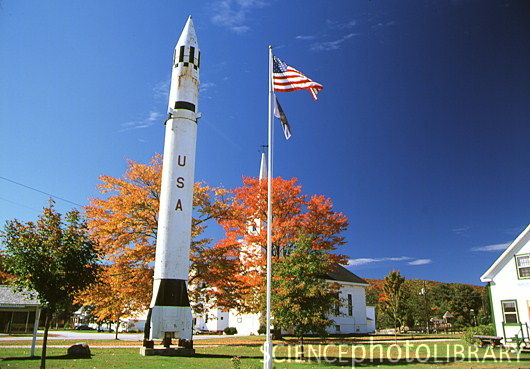 Not exactly what I was expecting. I of course stopped to check this out.

So I figure, maybe a replica Redstone like the one at the McAuliffe-Shepard Discovery Center in Concord. I took a look up the inside from the business end. Hmmmm. Although the engine, steering vanes and guidance system had been removed, its 100% genuine.

According to the kiosk on the town common, in 1970 local Ted Asselin thought that school students in NH should have more exposure to the space program.

With Alan B. Shepard, Jr. having been the first American in space and a native of nearby East Derry, NH, Mr. Asselin contacted the Redstone Arsenal to inquire on the surplus rockets. The Redstone Arsenal basically said, "yes, we have these available, you can have one for the town, but the U.S. government is not going to provide any funds to transport or erect it on the location."

In 1971, Mr. Asselin and a friend drove a tractor trailer to Alabama, loaded the rocket on board, and drove it back to NH. They did incur a heafty fine in Ohio for lacking the proper permit, but completed the trip and the Redstone Rocket has been standing in the Warren town common ever since.

It needs a coat of paint. Tony ? 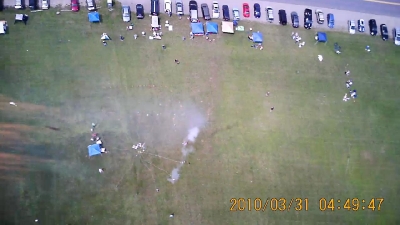 We had two very different days for our launches in Acton this year. The first on August 13th was a hot and clear day with little wind. The photo on the left shows only some of the cars. We had 350 flights, the most we've ever had at an Acton launch. August 27th was much different. It was cooler and the sky was overcast most of the day. 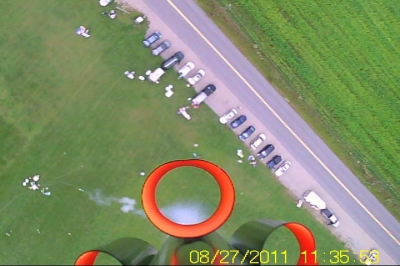 With the threat of rain coming in ahead of hurricane Irene attendance was lighter as you can see from the cars in the photo on the right. The rain turned out to be more than just a threat. Checking the weather radar at 1:00 it was clear that we had to be off the field by 2:30 if we planned to stay reasonably dry. After a little over 200 flights we wrapped things up at 2:00 and were on the road just as the rain started. Check the Gallery for pictures and the Forum for videos. The Gallery is available for everyone to share their photos. Just upload them to the "Category" for the day.