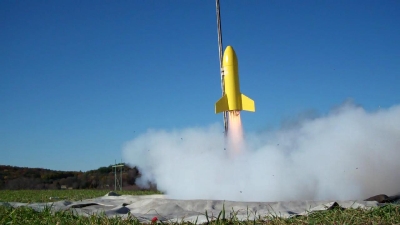 Yet another fine day of rocket flying. We seem to have some of the nicest weather for our November launches. The winds were low and for the most part they were blowing in the right direction. It was a little cooler than our last launch but those of us with our new CMASS shirts and sweatshirts were comfortable. There were 315 flights ranging from 1/8A to J, fewer high power flights than our last launch but still a good variety. If you took some pictures please upload them to the gallery so they can join these that are already there. There are a couple of videos here  and photos and videos in this thread on TRF. As is our custom, after tearing down the range some of us went out to eat. We were disappointed to find that the barbecue place in Amesbury had closed so we ended up at the Barking Dog. They had fantastic desserts that none of us really needed. We're going to end our next launch with a night launch so get those LED's and batteries ready.

After two disappointing cancellations because of the hay cutting we were rewarded with a really nice day for flying. The sky was looking rather ominous at times but that's as bad as it got. Temperatures stayed around 60 and the wind was lower than forecast and even calm at times. This was the Fliskits 9th anniversary so Jim kindly picked up the field rental fee and provided cake. There were over 130 flyers and spectators from at least five states. The flight count was around 330 from MicroMaxx on the low end up to K. There were more high power flights than usual and all were good. I think we had three (Kenn says we had 15. Since he was LCO all day I'll defer to his count.) Level 1 or 2 certifications There were also fewer motor failures than usual. It was just a really great day. If you took some photos please add them to the ones that are in the gallery. There are also videos here (the first five) and more in this thread on our  forum and  this thread on TRF.