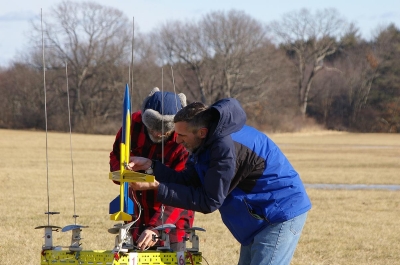 I think we've had different weather every year that we've held our January Acton  launch. It wasn't as cold (or as warm)  as it's been in other years but it's never been as windy. And what would you expect people to fly on a cold windy day? Gliders of course. With one notable exception, they flew surprisingly well. The constant for our winter launches seems to be good attendance. There were at least 30 cars parked along the rod and evidently most were driven by flyers because we had 103 flights in four hours. The majority of the flights were A and B but several brave people flew F and G motors. There are photos in the gallery.

November 19, 2011 Amesbury Launch and other things 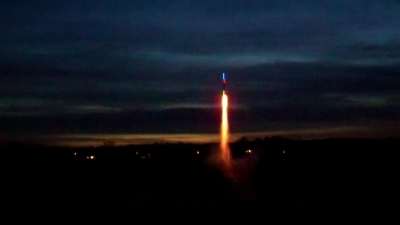 We finished up the 2011 season with a fine day of flying followed by our annual night launch. The daytime weather was cool and breezey, not the best November we've had but certainly not the worst. The winds were lower during the night launch but it was dark. We had the usual mix of launches during the day with about 200 flights. There were about a dozen flights after the sun went down. There are pictures in the gallery (check out Howard's slingshot recovery) and some threads in the forum.

In a few weeks we'll be putting together next year's schedule. We could still use an alternate place to launch in September and early October.

Our winter launch is scheduled for January 14th in Acton. I'm predicting bright sun, no wind and temperatures in the high 30's. We're going to have a table and probably launch a few rockets at the Acton Winter Carnival on Febuary 4th. More details as we get closer.