We are GO for today's launch in Acton.

The first of our three TARC launches for this year was held this past Saturday. The core group of Kenn, Ed, Guy, Frank and myself were there to help. The weather was pretty nice for Feb; it was sunny, and temps were in the 30's with a slight wind and even some still periods during the afternoon. We actually had no TARC teams show up but did have one middle school student with his parents. He needed to get some flights in for a science fair project. This was his first time launching so everything was new to them. He flew an Apogee kit, which has an interchangeable fin can with six different 3 fin configurations. He actually got in about a dozen flights recording the altitudes with a Jolly Logic Altimeter 2. There were some minor repairs needed during the flights and Guy and Frank were right there to help. It was a pretty successful day for him, and he and his parents were very happy and appreciative of the help.

Guy and Frank got in a few launches during the lull periods. But probably the biggest event was a launch by our illustrious president! A very successful launch of a FlisKits tube fin rocket. That by itself made the day! Pictures are in the Gallery. I'll update this article after each of the upcoming scheduled TARC launches. Stay tuned. 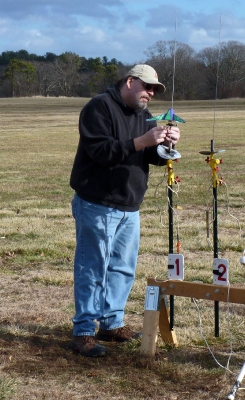 The annual CMASS Winter Follies launch was held this year on Saturday, January 11, in Acton. Temperatures were in the 60s, so this year the only folly with a January launch happened to be the wind. A few strong gusts led to launches being temporarily held, but we still managed quite a few flights. Because the wind was blowing toward Route 2, the launch pads were set up at the opposite end of the field. Nevertheless, one small rocket on a C motor managed to drift across the highway and across the field on the other side, but it was recovered! Pictures are in the Gallery.