× Welcome to the CMASS forum!

A place to discuss anything related to CMASS (and other) launches.

Less More
1 month 4 days ago #10067 by tlainhart
Stickershock vinyl decals experience was created by tlainhart
A while back Estes had a clearance sale on two spare parts Pro Series Ii vehicles - the "Sahara" and the "Panavia". Because they're SPEVs, there were no decals.

Although there's no hang card for the Sahara, there is a picture and suggested paint scheme in the plans, which suits me well, as I appear to be missing the part of the brain that inspires one to "color outside the lines". I thought it also a good opportunity to try Stickershock's products, as he sold the suggested paint scheme decals relatively cheap (there's not much there - black bands and the checkerboard pattern).

Overall, it worked out OK. I think I've used better waterless decals over the years from Estes, BSD and NCR, but it was fine for this rocket. If I use these again, I'll use more soap in the water for better placement. The purple one on the right. 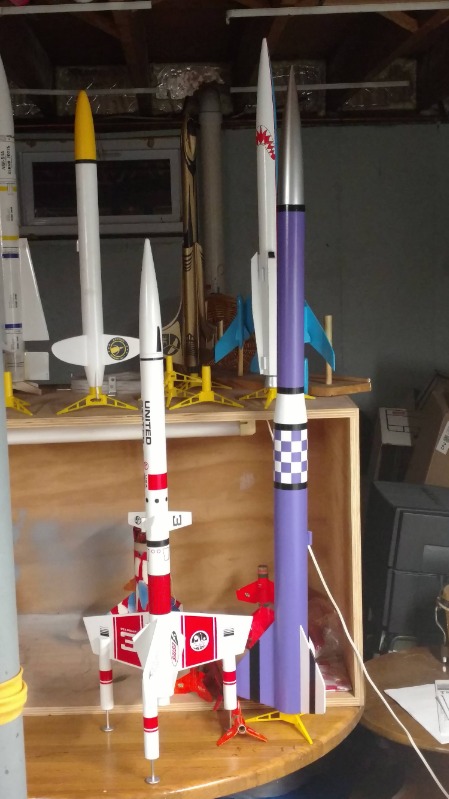 None of the original 4 Pros Series II kits (Argent, Leviathan, Partizon, Ventris) came with decals either. It would have added too much to the price of the kits.

During one of Estes' first clearance sales, they had a deal on the bundle of the 4 kits. I picked them up with the idea of kitbashing some of them. I may have to make a Sahara. I know that there's the slotted tube and fins from a Partizon and the top part of an Argent, but is there an extra tube in there somewhere?
Last edit: 4 weeks 2 days ago by jbuscaglia.

Less More
4 weeks 2 days ago #10076 by tlainhart
Replied by tlainhart on topic Stickershock vinyl decals experience
I was about to reply, with embarrassment, that I couldn't recall. However, I do remember the extra lower tube now, as I couldn't get the seam to disappear. The tolerances were off just a bit, and whatever I tried to hide with filler was stressed during painting.

Less More
4 weeks 1 day ago #10077 by DeltaVee
Replied by DeltaVee on topic Stickershock vinyl decals experience
I used Bondo for mine... it works pretty well but sooner or later the seam will start to show thru after some launch stresses....