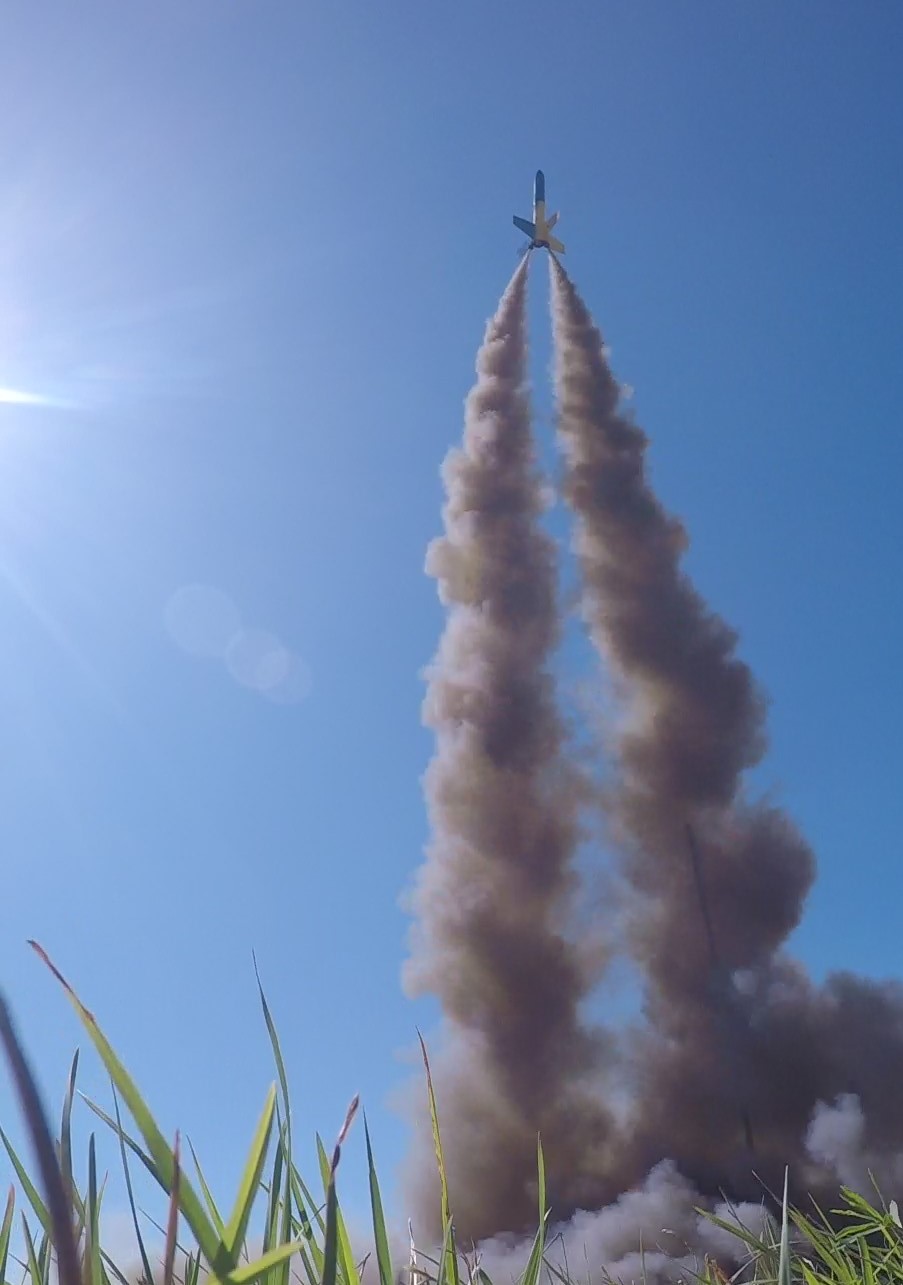 Shiver-me-timbers and Blow-me-down! It was a grand day for our return to our home port of Woodsom Farm! We set up and used all 11 launch pads and one HPR pad. The launch day again was from 10 to 2 and no grub was served. The state outside gathering limit is still 50 people and we were well under that for the entire day. Temps were in the 50's and the sun was shining; but the winds were a givin' us some trouble that day. Ole Captain Grey-Beard Blade - he runs a tight ship - he shut down the HPR launches a couple of times that day whenever the winds were a blowin' toward the power lines. Arrrrgh! There were some talk a' mutiny but he and first mate, Guy, The Cutlass, kept the crew under control. There were 115 voyages with motors ranging from 13 mm A's to a pair of I motors.

Curtis sailed his Deuce's Wild on a pair of CTI I212's - and they sailed nicely. But his earlier voyage on a pair G motors crashed into the rocky shores. We did have one lost rocket, John Petrakis's Arcas was a headin' for the crows nest! But the Lehmann boys (Greg and Dave) scurried up that mast like the expert seamen they were and got 'er down. And they all celebrated with bottle of rum! A little disappointed that Scott Clement had

no pirate-themed rockets but he did launch his Tweety Bird house! The first mate launched is newly christened Astrocam (no pictures yet though!). I launched a few rockets from my 60's psychedelic period. And to keep with that theme, there were some good trips and some bad trips. I had great launches of  'Timothy Leary' and 'Are You Experienced', but the 'Test Run' was unstable, my PAC3 core-sampled, and 'Blues for Allah' never left the ground. We had one successful Junior L1 certification. Congratulations to Grant Watson!

Thanks to everyone who attended for abiding by the Covid guidelines. Thanks again to Ole Grey-Beard and his first mate for manning the launch station most of the day. Thanks also to Howard, Tony, Frank, and everyone else who helped with set up and take down and the launch in general.

Our next voyage in search of treasure is Oct 5th at Woodsom Farm!