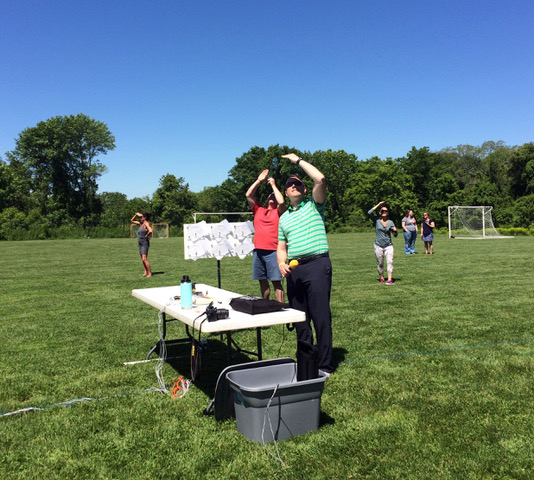 We are into our second decade of rocketry at the Page School in West Newbury and we started it off well. This year was one of our better units. The kids were great and really payed attention; the rockets were well built and the launch was great. All aspects of the unit went really well - well, almost all.

The 6th grade had 58 students this year, so we went back to our normal three rocket kits: Thing-a-ma-jig, Razor and Alpha I.The 'new' FlisKits guys were able to get us a bulk package of Thing-a-ma-jig's in plenty of time for the build, and at a good price. I can't tell you what a relief this was. I was really nervous when Jim said he was retiring. But all is looking well with the new FlisKits and Jim should be feeling good. The same three teachers, Brenda Erhardt, John Peterson and John Benvenuti are still part of the 6th grade and have been for all eleven years. Each has been enthusiastic about the rocketry unit from the start and their enthusiasm and efforts have been a

major reason for its success. Each year there seems to be some occurrence or characterization that best describes the unit that year - which almost always involves glue, usually too much! This year though the kids were pretty good with glue, which made things a lot easier. No, this was the Year of Reaching Orbit! We had several flights on a B6-4 motor with calculated apogees of over 11,000 ft (and I didn't call in a NOTAM)! Pictures are in the Gallery.

This year's prebuild session, where a few students stay after school and help assemble parachutes, streamers and motor packets, fill glue bottles and prep each kit for the build session, went very well. The kids were very efficient and really worked well together. During the prebuild, I'm really focused on giving the kids instructions and answering questions and usually forget to take pictures until right at the end. This year I forgot entirely! So, there are no pictures this year from the prebuild.

As usual, each homeroom builds a different rocket and we follow the same procedure during the build. I demonstrate how various parts go together - the 'dry fit', with the kids just watching. The kids then do the same dry fit and if all parts fit together nicely, we follow it with glue. We do that for each step of the build. Each year, there are two issues we normally have to deal with - too much glue and jumping ahead. But not this year. The kids were really good with both the glue and following instructions. In the middle of build session we stop to have the glue set on what was constructed so far and I give a short lesson in rocketry, triangulation and some basic physics. Afterwards we finish up the build.

This year, there happened to be 30 minutes of free time at the end of the school day on the day of the build. So we decided to have our normal pre-launch instructions then. This is where I go over the sequence of events for the launch, give safety instructions, demonstrate how to fold the parachute and streamer, and how to load a rocket onto the launch pad. On the day of the launch we went through the flight prep instructions again. This time, with the kids actually prep'ing their rockets. It was very helpful for the kids to hear the folding and loading instructions twice and we were able to get to the launch field a lot sooner than in past years. We all agreed that this worked very well and will keep this going forward.

Launch day was a great day - sunny, not too hot and a very slight breeze blowing along the long direction of the soccer field. I'm really a stickler for having 7 proctors at our launch. I feel strongly that this is the minimum number we need to ensure that everything moves smoothly and that any issues that arise can be addressed quickly. John B is LCO, John P mans the tracking station, Brenda helps with loading of rockets on launch pads, a teacher's aide usually manages students as they wait for their turn to launch, two people at the reload table Barbara Ianazzi (a reading teacher) is one. That leaves me to repair damaged rockets, retrieve rockets that leave the launch field and tend to the unexpected (which always happens). We only had six proctors at the start of the launch but were able to recruit one of the parents to help Barbara at the launch table. I do not remember her name (and apologize for that) but she did a great job and said she wanted to return next year to help.

Each team launched their rocket twice, first on an A8-3 and then on a B6-4, and used the Estes Altitrak and stopwatch to measure how high their rockets flew and average velocity. The rockets recover via chute on the A motor (except for the Alpha which is on a streamer) and then on a streamer for the B motor. Each year we get a big 'Wow!' from the kids and parents when we launch the first B motor. They are just amazed at how high it goes. The teachers (especially Brenda) and I love hearing it. It never gets old! Of the 54 launches we only lost two rockets and had one very classic lawn dart. We also had a special treat; the Pentucket School District Superintendent, Dr. Justin Bartholomew, attended the launch and even took a spell at LCO. He is a natural M.C. and did a great job at LCO. It was a lot of fun to listen to him and I think he really enjoyed it. And I know it meant a lot to the teachers and myself to have him there. I've already told him we want him back next year!

The one hic-up of the launch was that the kids were having trouble manipulating the Altitrak. John P said they had difficulty during their practice session and was not hopeful for the actual flights. He was right. Many teams just could not get the hang of it, resulting in flight altitudes worthy of an L3 certification! To their credit, the kids knew that they were having trouble with the Altitrak and knew that their calculated altitudes were way off. It takes practice to manipulate a tracking device like the Altitrak. So I was not concerned about that and felt it was more significant that the kids knew their results did not make sense and understood why.

After all of the team launches were done, we had a 6-way drag race with two of each rocket. The kids love seeing that!  I launched two of my own: Frick-n-Frackand Estes CATO. The Frick-n-Frackis a perennial favorite. Finally, we launched six Alpha'seach with two 80 ft. streamers - and we got all 6! The kids and parents really love this. We took our group shot, cleaned up the field and the kids headed back to school. That afternoon, they finish their calculations and have a writing and drawing assignment about the unit. John lets me read the kids writings afterwards and I always enjoy it. All of the students described how much fun they had and that this was one of the highlights of 6th grade. This year there were a number of students describing how, beforehand, either that they were concerned that building a rocket would be too complicated, or not interested because it would be too simple. The former were impressed with how easy it was to assemble their rocket, and the latter were impressed with all of the parts needed to assemble a rocket correctly. Both wrote that the build was a challenge and were happy with the rocket they built and felt good about their accomplishment. There was even one student that wrote how she enjoyed the Physics lesson and can't wait until she can take Physics in high school - that was a first!

So, some statistics. In the past 11 years we have built a total of 329 rockets (Thing-a-ma-jig, Razor, Alpha andSchool Rocket) and have had 686 launches. We have lost 30 rockets; have had 5 lawn darts, 5 core samples and no CATO's. More significantly, no injuries or mishaps of any kind. And we have received only positive feedback from students, parents and administration. I've already started planning next year.