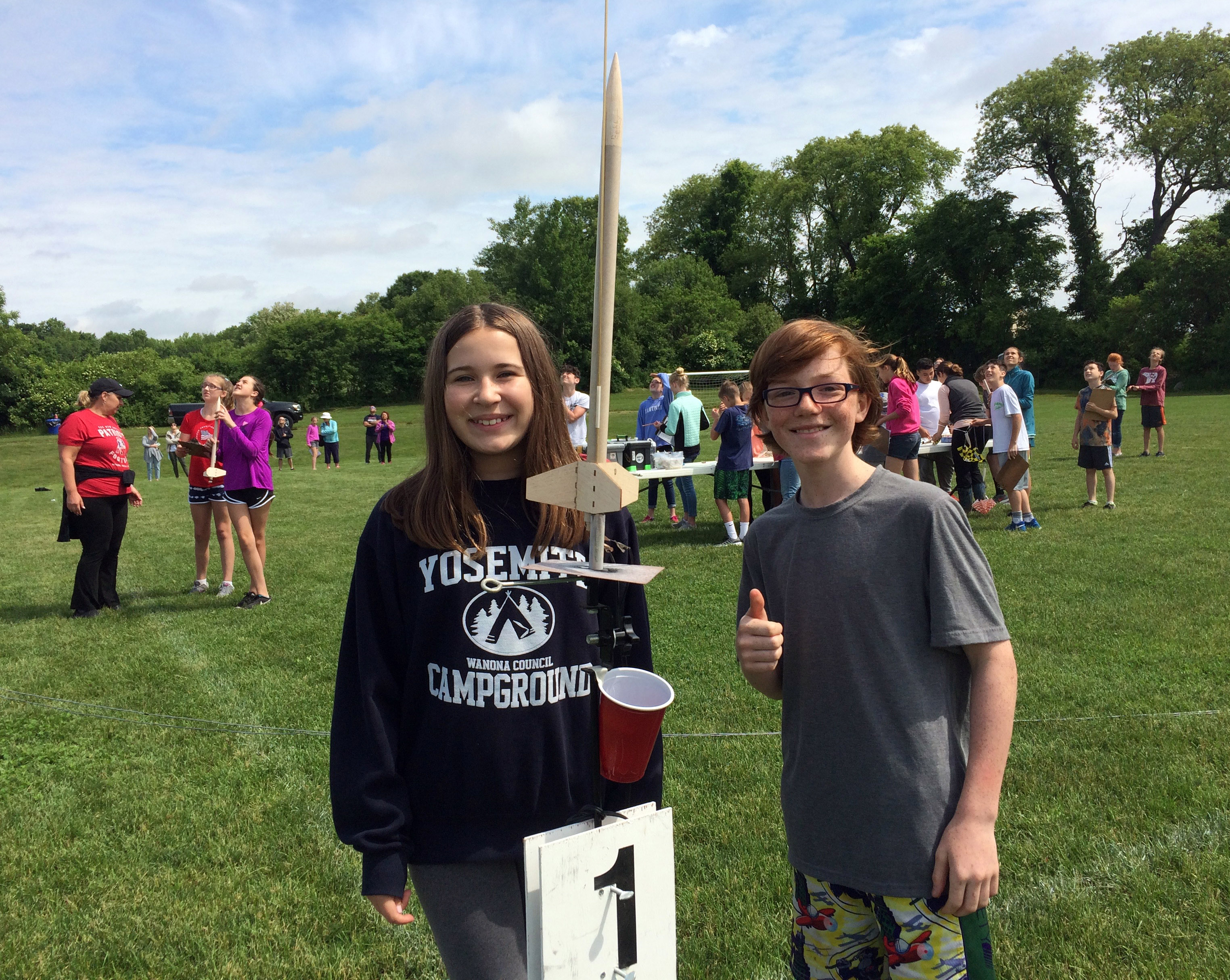 This was our tenth year of rocketry at the Page School, a definite milestone! It was also our smallest class size - 44 students; but the same three teachers, Brenda Erhardt, John Peterson and John Benvenuti. Because of the small size and the particulars of the 6th grade organization this year, we went with only one rocket kit, instead of the normal three. The one kit was an obvious choice, our workhorse - the Thing-a-ma-jig! Oh, are we going to miss Jim!!

The unit is as it has been for many years. It starts with a 'prebuild session', where a few students stay after school and help assemble parachutes, streamers, motor packets and photocopying. The second is a day of practicing the use of the Estes Altitrack and stop watch. The third being the build and rocketry lesson and finally, and the most fun, launch day. Each year there seems to be some occurrence or characterization that best describes the unit that year - which almost always involves glue, usually too much! This year it was the opposite - Year of the Missing or Non-Setting Glue! Not a catchy title but it works. The unit was actually held during the first week in June, but it was a busy summer and I just got around to the article now. Pictures are in the Gallery.

This year the pre-build went very smoothly and we actually got everything done that we needed to - a first! And it was done in less than two hours. We had the students do the usual - assemble launch bags (motor, igniter, plug and wadding) for both A8-3 and B6-4 motors, fill glue bottles, and assemble trifold/shock cords, assemble parachutes and streamers.

Since we were only building one rocket, all three home rooms built the Thing-a-ma-jigin one session. And as we do every year, we follow the same procedure during the build. I demonstrate how various parts go together - the 'dry fit', with the kids just watching. The kids then do the same dry fit and if all parts fit together nicely, we follow it with glue. We do that for each step of the build. And each year, there are two issues we always have to deal with - too much glue and jumping ahead - i.e. as soon as I take two parts in my hands for the dry fit, they are already gluing those two parts together! We were on top of it this year and the kids weren't too bad for each step of the build. In the middle of build session we stop to have the glue set on what was constructed so far and I give a short lesson in rocketry and some basic physics. Afterwards we finish up the build.

We did have two new glue issues this year. The first was the glue not setting during the 15 to 20 minutes of the lesson. We usually construct the motor mount before the lesson and insert it into the body tube after. This has always been enough time for the glue to set enough for the motor mount to be inserted. Not this year though. A number of motor mounts fell apart as the students tried to insert them into the body tube. The only thing I could come up with is that we switched from Elmer's to Tight Bond wood glue and that it takes longer for Tight Bond to set. I'm not sure if that is it but we will be going back to Elmer's next year. The second problem didn't show its face until launch day - missing glue! A few teams did the dry fit for different parts and then forgot the glue! Those were interesting flights!

Launch day was a great day - sunny, not too hot and a slight breeze blowing along the long direction of the field. The only issue we had to deal with was that we were going to be shorthanded again with only five proctors, including Katy. So again this year I was going to be taking pictures, which is never good.

Each team launched their rocket twice, first on an A8-3 and then on a B6-4 and used the Estes Altitrak and stopwatch to measure how high their rockets went and average velocity. Some chose to launch a third time, but there really is not enough time for a third launch and some teams were just done after two. I think we will discontinue the third launch next year.

Ok, so what happens when you only dry-fit part of your rocket. We had a couple of partial re-kittings; a couple of separations with the nose cones under parachute gracefully drifting off toward the Merrimack River. And there is a picture in the gallery of what happens with a dry-fit engine block!

After all of the team launches were done, I launched three of my own: Frick-n-Frack, Too-Cool-for Spooland Decaffeinator. All worked great. The Frick-n-Frackalways gets a big cheer. That is a perennial favorite. They love seeing the staging and watching the two stages spin to the ground. The kids also really loved the 'coffee cup' rocket! Finally, we launched six Thing-a-ma-jigs, each with two 80 ft. streamers. The kids and parents really love this. We took our group shot, cleaned up the field and the kids headed back to school. That afternoon, they finish their calculations and have a writing and drawing assignment about the unit.

Ten years is a long time and it's hard to believe we have been doing it this long. I enjoy coming back each year and am happy that the 6th grade team and the Page School want to continue it.

On to the next ten.